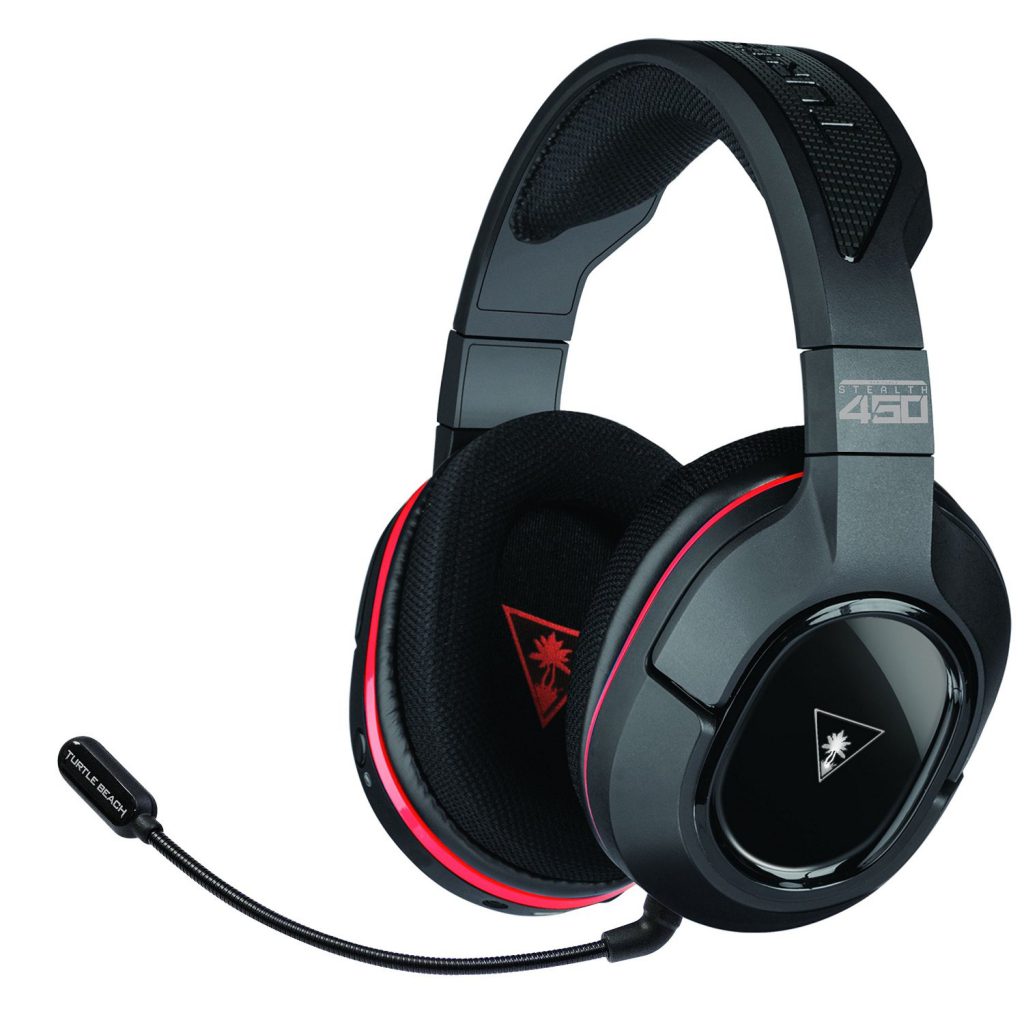 Wireless headsets usually come at a premium cost and having reviewed quite a few on this site, we know that you usually have to spend up to the £250/$299 mark to get premium functionality.

The Turtle Beach Ear Force Stealth 450 however is exceptional. Boasting DTS Headphone X 7.1 channel sound, it packs all the greatness that can be expected from a top end Turtle Beach headset, remarkably, at less than £100.

It has great sound from its 50mm speakers, an exceptional 15 hour battery life, long wireless range, stylish looks and good comfort over long periods. The 450, truly is one of the best wireless gaming headsets available for the PC on the market right now and available to pick up for a meagre £89.99 on Amazon.

The Turtle Beach Ear Force Stealth 450 is a fully cordless headset for the PC that can technically work as a set of headphones when out in public as well as in the comfort of your own home. It’s available to be used on a Mac but with a more limited functionality so if you want full use of all the features, you are going to want to use on a PC with Microsoft Windows 7 or greater.

Turtle Beach are not renowned for stylish looking headsets and we have commented in other Turtle Beach headset reviews that they are getting better at distancing themselves from their former bulky toyish looking, button ridden headsets. They still lack behind the likes of Astro headsets but as is noticeable in the Turtle Beach Ear Force Stealth 450, they are continuing to make strides in improving the look of their headsets.

You may notice that other Turtle Beach Headsets that are designed for PS4’s or Xbox One’s are coloured Blue and Green respectively. PC headsets by Turtle Beach are usually a red as is the case with the Ear Force 450. 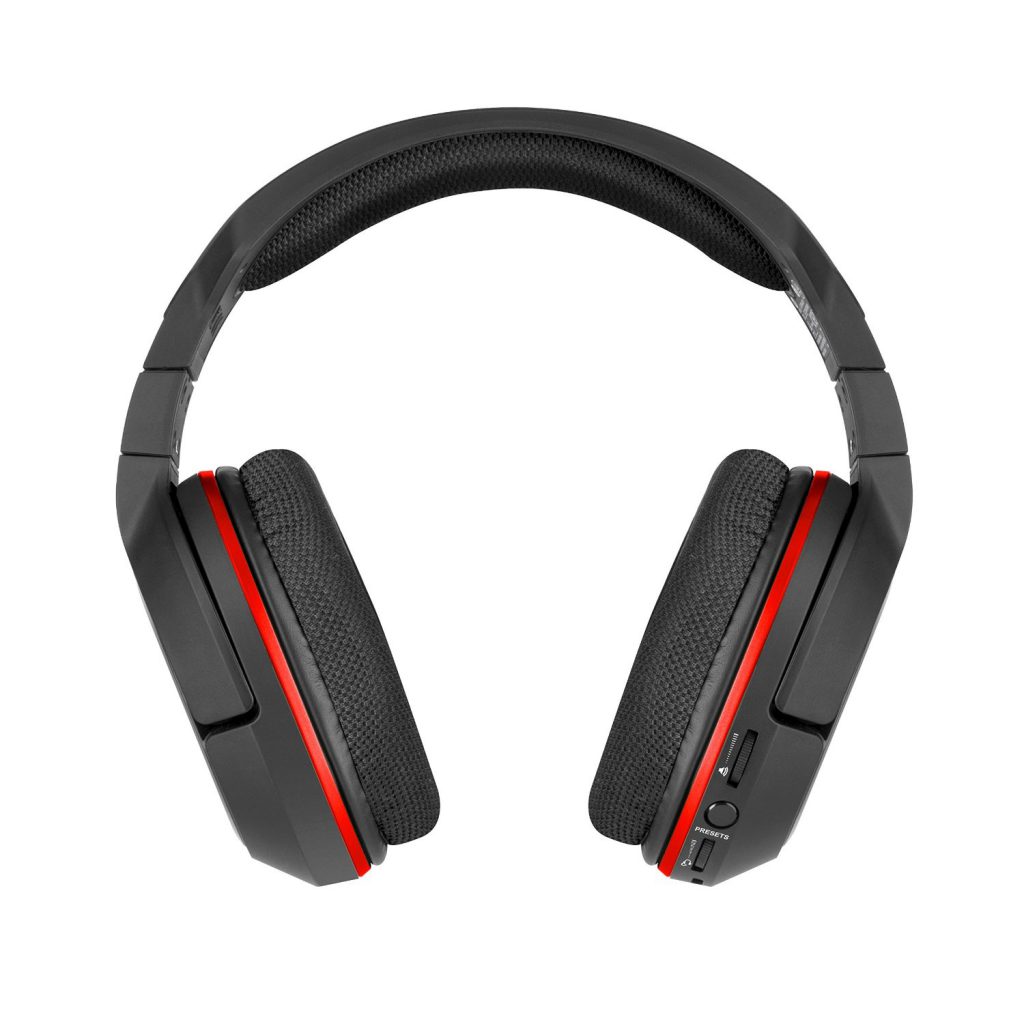 The 450, is subdued and simple (quite fitting for its ‘stealth’ name) in a good way. There’s no flashy lights, big buttons or lavish colours and liveries which makes you feel like you could actually wear these in public. Built with a light plastic, they feel light but well-built and sturdy with some good design choices making pressing a button by accident quite difficult. The ear cups illuminate white when switched on which is a neat touch.

Set up is a breeze and requires no installation of drivers if you want to simply plug in and play. It comes with a USB transmitter, which once plugged in simply requires you to set the sound output of your PC to the Stealth 450. If on occasion you need to pair the devices, there is a small hole on the side of the transmitter which you need to press in with a small pin at the same time as the power button on the headset.   Then simply turn on your headset and plug in the detachable mic. 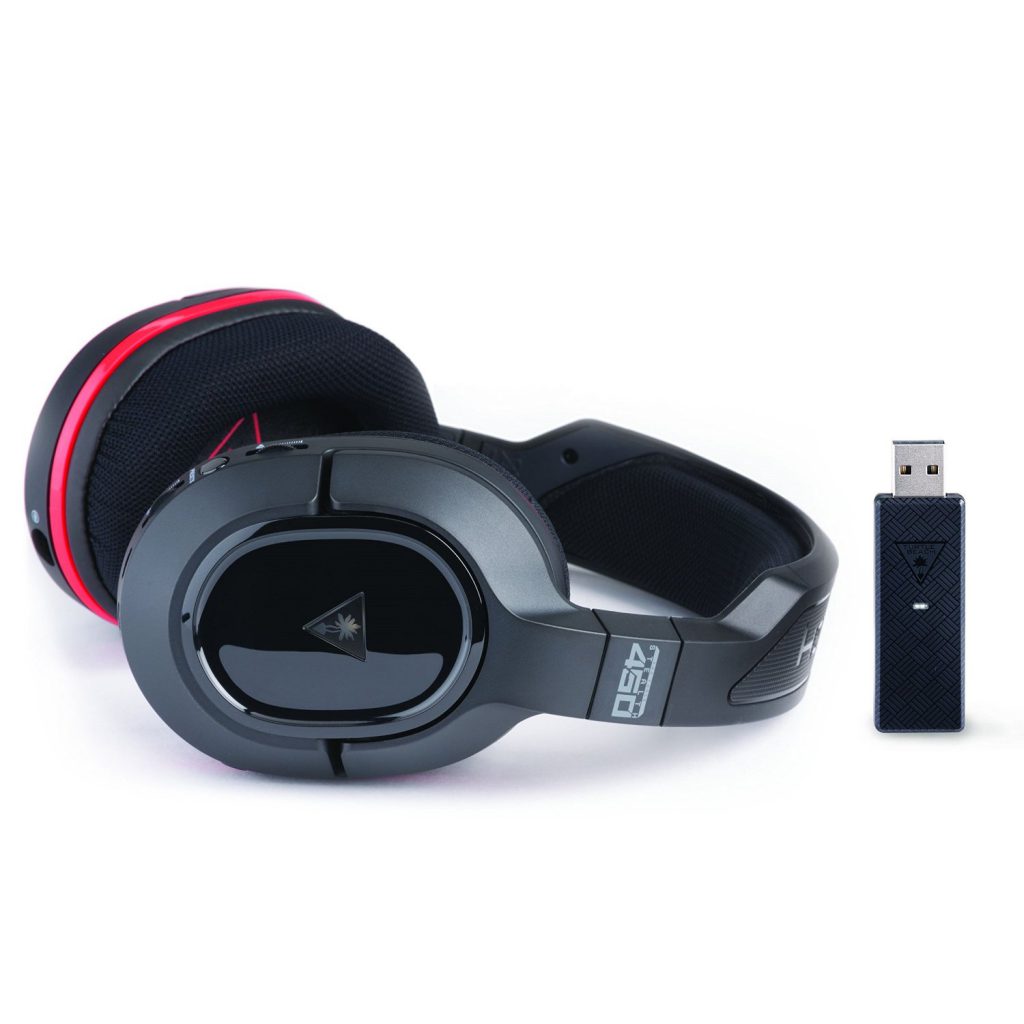 Drivers can be installed if you want to use the advanced audio options and features such as Superhuman Hearing which is great for hearing footsteps and can be turned off and on mid game through hotkeys. The Turtle Beach installation tool, once downloaded, will let you to set up 7.1 surround sound from the system settings in Windows and from there you will use the DTS Headphone: X decoder. Pro users will want to tweak around with the settings though most users should find it easy enough to play around with, if not master exact optimum settings.

The 450 has 4 EQ pre-sets se on the headset which you can cycle through depending on the entertainment in use. You can also revert back to stereo mode if you wish for simpler audio.

The Headset comes with a headphone cable which will allow you to connect to any device that has a headphone slot such as a smartphone, tablet, or mp3 player though sound output is stereo only. There are some stereo presets available which will give some variable sound modes such as Natural, Bass, Bass Boost and Vocal Boost. This button sits between the volume and mic volume which are each controlled by separate wheels along the left ear cup.

The mic, or the boom mic as it is called with the 450, is detachable and goes into the left ear cup whenever needed. It has excellent clarity and your voice comes through meaning you can hear how loud you are shouting!

The material used for the mic is such that it will hold in whatever position you bend it which is a small, but immensely valuable attribute of this headset. I cannot recall the amount of problems I’ve have had with getting the mic positioned jut right with other headsets. 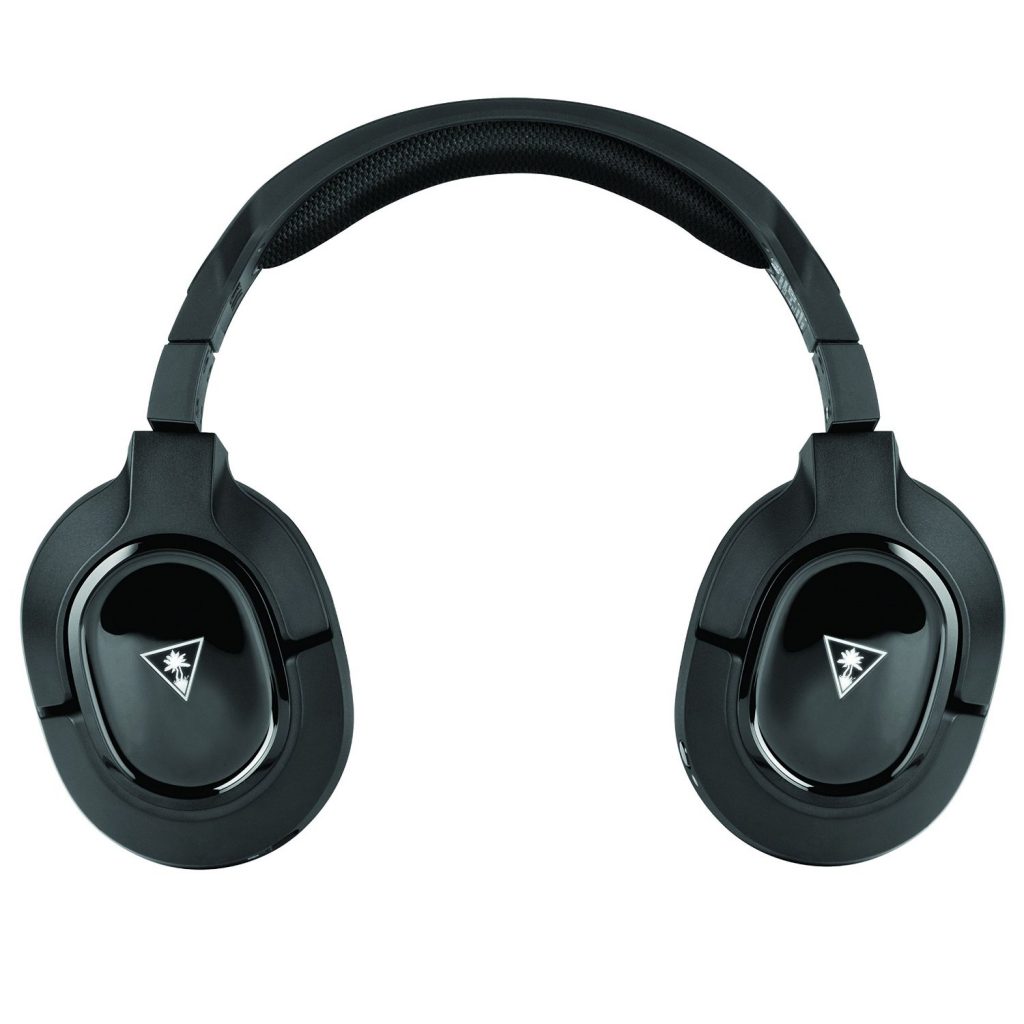 The headset is charged using the micro USB slot and cable provided. You can average a 15 hour period before having to recharge though make sure it is fully charged before use (usually around three to three and half hours).

With 50mm drivers, the Ear Force 450 provides impressive sounds with sizzling highs and thumping lows. You are likely to experience noise spill above around 40% volume which is a slight negative for others in the room.

On Stereo Mode, the sound is great and music sounds as good as on any decent headphones with presets that help with providing a more tailored experience. They’re probably not a replacement for your Dre Beats, but impressively not that inferior to them.

For gaming, the headset is fantastic with little to no distortion representative of good speaker drivers. Enabling the DTS Headphone: X provides improved sound with deep bass and loads of detail in higher pitched sounds and vocals. Battlefield 4 and COD Black Ops 3 were great experiences picking up all the detail in suburban areas and all importantly detecting those knife kills from behind.

The presets, whilst few of them, surprisingly help with enriching your music, movie and gaming experience and whilst there are only a few to choose from, Turtle Beach have struck a good balance of providing flexibility and simplicity. 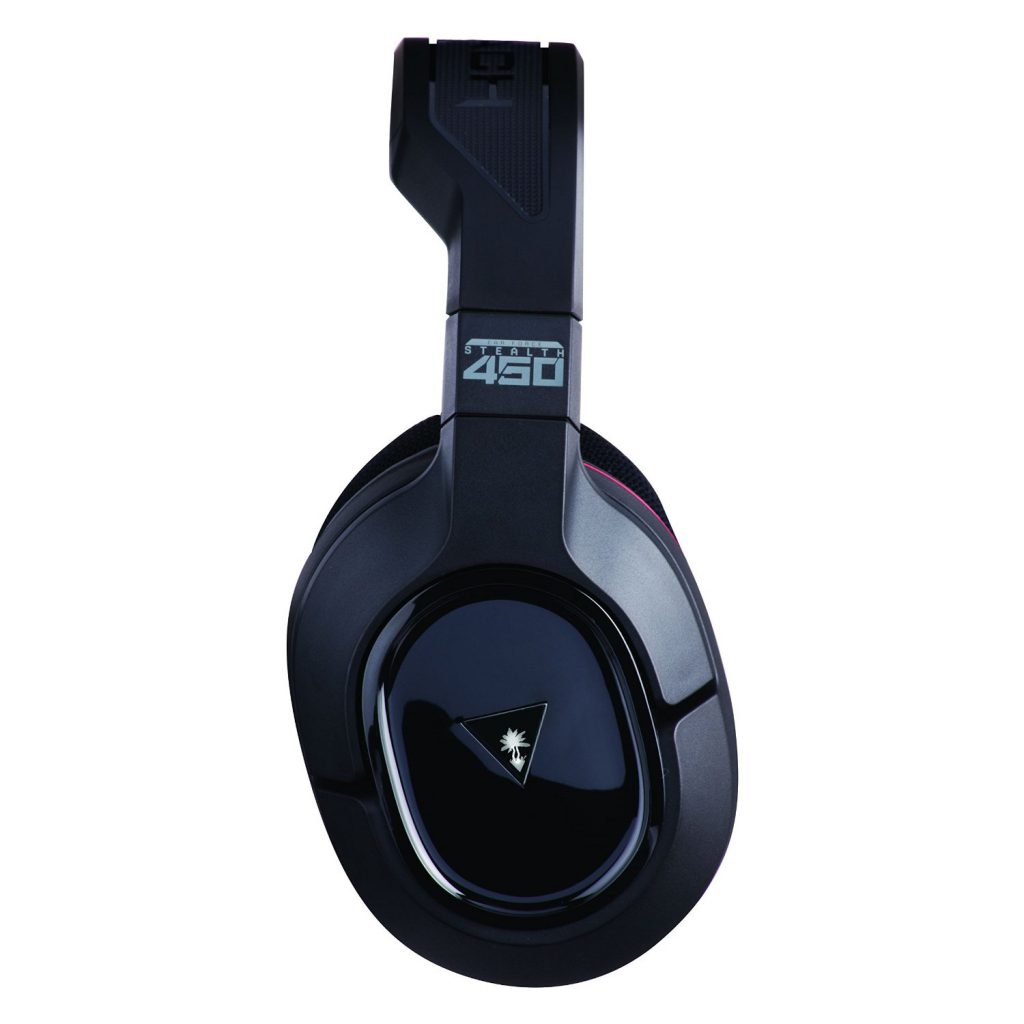 Impressively, the range on the 450 is incredible providing a good 30 foot range though we were able to exceed this when making our way onto the 3rd floor some 40 foot distance through layered walls. Interference may affect your actual distance but Turtle Beach have said that the transmitter has he ability to hop frequencies when it encounters interference.

The Boom Mic, is really impressive such that it deserves a segment of its own in this review. Turtle Beach mic’s have historically not been the best but the 450’s Boom Mic, provides clear communications with friends online and they do a good job of ensuring your voice is routed through your speakers so that you can hear yourself in the mix of the action.

The material used for the mic brilliant as mentioned above which will hold in whatever position desired. You should experiment with positioning but we found that positioned around an inch away from the side of your mouth gets the best results.

Should you buy the Turtle Beach Ear Force Stealth 450?

Paying this amount would usually get you a headset that overtly distorts and has a poor build quality. Not the Turtle Beach Ear Force 450. This is a premium headset at a bargain price.

The biggest omission is that there is no inline remote and there is quite a lot of noise spill. Otherwise, your money here will get you a well-constructed, easy to use great sounding, feature rich quality headset with great battery life and great range.

If you want a premium headset at a bargain price, you should definitely by the Turtle Beach Ear Force 450 which is available on Amazon for £89.99. 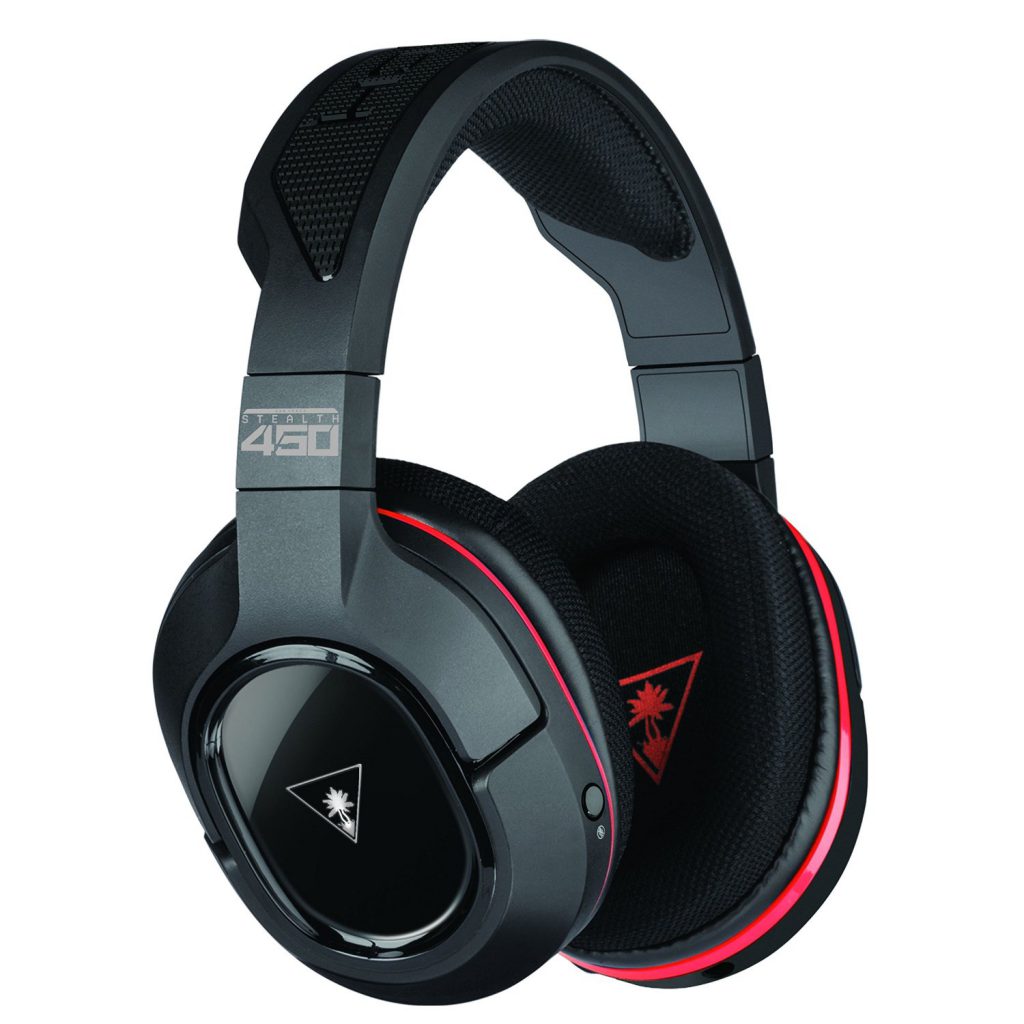 The best value gaming headset for PC on the market today loaded with features and a stylish design – a must for any serious PC gamer on the market for a headset. Shop on Amazon for best prices.