The Logitech Driving Force GT is an excellent racing wheel that can be used by beginner and advance sim racers that does not compromise on quality or functionality by its relatively cheap price entry.

There is no racing wheel on the market that strikes the balance between price and quality quite like the Logitech Driving Force GT. Its actually amazing how Logitech have managed to make a racing wheel of this quality with so few compromises in design choices and build quality. We get that a racing wheel is a luxury peripheral usually reserved for the hardcore racers out there but if price has ever put you off investing in a worthwhile racing wheel, the Logitech Driving Force GT presents the perfect opportunity to pick one up even if just to enjoy the official game as it should be played – Gran Tursimo 5/6.

In true Logitech style, the wheel comes nicely boxed and well packaged and contains the wheel, pedals, power leads and user documentation. Its relatively easy to set up and should clamp on to your desk or racing stand (no screws necessary) though make sure you have a bit of space as the mount is hefty and takes a little room (it needs to because of the motors inside it). 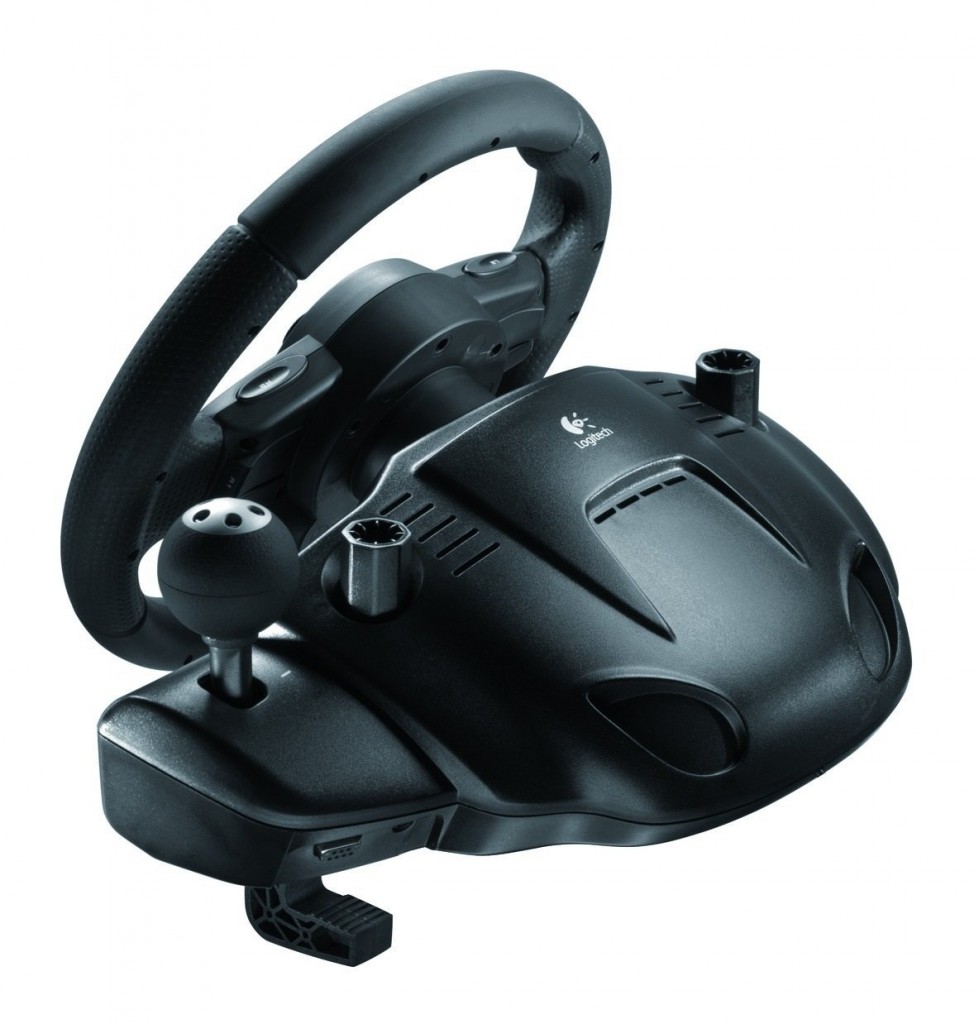 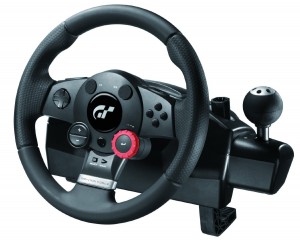 Once set up, there is very little required in the way of setting it up in game to get going and so you can be on the road in minutes.  There are however lots of settings you can configure to suit a particular game type or track type – the Logitech forums and GameFAQ’s are packed with user suggestions. You can adjust the steering dead zone, steering linearity, brake saturation, force feedback strength, environment effects, wheel weight and a raft of over things to perfect your racing experience. Tinkering can make a big difference so it is well worth looking up some user suggestions.

The Driving Force GT provides a sense of realism via its force feedback motors like no other in its category of racing wheels. The force feedback motors are really powerful and accurately recreates bumps, crashes, and loss of traction so that you will feel it when you drive over a verge or end up off track. Its really impressive how the various circumstances on the track, or off as the case may be, re reflected in the feedback from the wheel so for example in wet weather conditions or rally tracks, the traction is loose compared to driving F1 on tarmac.

The wheel itself has a number of dials that can be used to adjust transaction control levels and brake bias on the fly and has the PlayStation buttons that replicates the buttons of the Dual Shock 3. It also has a D-pad, left and right bumpers and paddle buttons that act like left and right triggers. There is a start and select button and a PS button though annoyingly you cannot start your console from it when switched off unlike the Dual Shock 3. 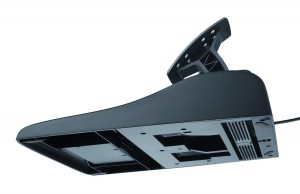 The grip, whilst not leather, is a comfortable rubber grip that feels lovely to touch and comfortable to use. The wheel is a nice 11 inches in diameter and the gear shift, whilst not often used I must confess,  is nonetheless a viable alternative to the paddle shift. The wheel is weighty and together with the force feedback, we strongly suggest that you have a good desk, PlaySeat or other solid set up to mount this on. Please do not think you can get away with playing this from your lap. You cant!

The pedal are probably the least impressive part of the product owing to its plastic look and feel. There are grippers underneath to prevent slipping should it be placed on carpet. This can be flattened for smoother surfaces and there are holes to securely fasten depending on where they are to be mounted.

Since its release, it now has a raft of compatible games though it is not compatible with next gen consoles. We spent most of our time with GT5 and GT6 and F1 2013. It works absolutely brilliantly on each with lots of in game options to tailor and customize the experience.

There aren’t many gripes we have with this Logitech Wheel but Drive Force GT does have a few noticeable issues which are worth highlighting.

The paddles shifters are very small and can easily be missed if you have small hands. Not only are they small but quite difficult to depress which makes it awkward to press when trying to concentrate on the road ahead of you at 150mph! You soon get used to it but its nothing like the ones you will get on the Logitech G25 or Logitech G27.

In addition, it can get incredibly noisy. Its fine and unnoticeable during the day but we found that it could be a problem if playing at night whilst others in the house are trying to sleep. When going off track, the force feedback actually gets quite violent and the motors sound like they are at war with one another. We are not sure why the G27 is super quite in comparison and suspect it comes down to the motors used. 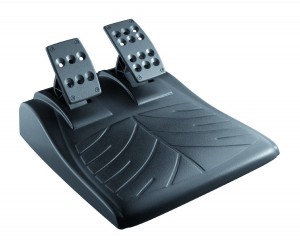 The pedals are on the cheap side in terms of build. They could do with being a bit more weightier but at this price it might be asking for too much. The pedals do depress a little to easy and so some users have within the gaps of the pedals at the rear, placed sponge balls to create more stiffness so your foot does not immediately flat out on the pedal. We personally were fine without doing this but felt that with shoes on, the pedals over time would take a beating. Being indoors, we were fine playing with our socks.

At this rice however, these minor qualms are forgivable.

This is a popular question and would have applied to the G25 too but that has since been replaced by the G27 and so you are not likely to be able to pick one up for new. Your budget is likely to be the biggest influencing factor here. We would suggest that if you are new to sim racing or not going to spend a ton of time using it, the Logitech Driving Force GT is the one to get. However if you want a quieter wheel, with a clutch, manual shifting, better pedals and overall a more quality when, the G27 is for you.

Check out this chart comparison for further differences:

Logitech have knocked one out of the park with the Logitech Driving Force Steering Wheel. You will not get a better wheel for this price elsewhere and we wholeheartedly recommend this for both casual or hardcore sim racers alike.

If you are interested in buying one, you can check out the cheapest prices here.

The Bad: Can be a little noisy | Pedals are not the best | Small paddle shifters