You can pick up good quality general media headsets for around the same price as the Corsair Vengeance 2100. However, as the 2100 is a wireless Dolby 7.1 headset dedicated for gaming, we wanted to acknowledge from the outset that we are subjecting these to a different standard so as to be able to give a more apples and apples comparison by comparing these to 2 other similar wireless headsets. 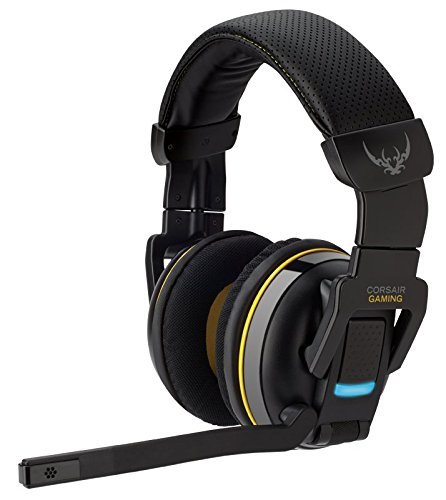 Just note however, if you are not a big mic/online chat player, there are some really good media headsets – the Audio Technica ATH M50X Monitor Headphones is to name but one.

As mentioned above, we have reviewed this headset in conjunction with two other comparable wireless headsets, the SteelSeries H Wireless Gaming Headset and the Astro A50. All three headsets are full wireless solutions.

You can check out their separate reviews here by clicking on the following: SteelsSeries H and Astro Gaming A50 Wireless Headset.

Of the three, the Corsair Vengeance 2100 is relatively inexpensive coming in at roughly half the price of the Astro A50 and the SteelSeries H. It uses wireless technology rather than Bluetooth.

Inside the box it comes with the Vengeance 2100 Dolby 7.1 Wireless Gaming Headset, the wireless USB dongle, a 1.5m USB extension cable and charging cable and various bits of paperwork such as the warranty card and quick start guide. 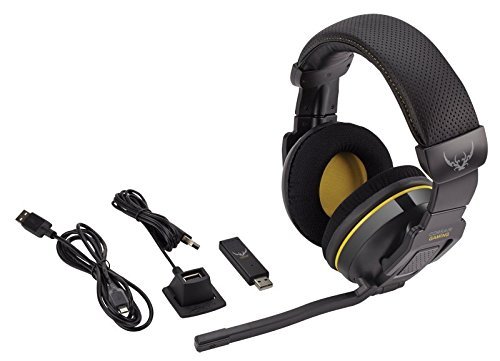 The Corsair Vengeance 2100 is for use with PC’s and is compatible with Windows 7, 8, Vista and XP.

The 2100 look really impressive with a nice subdued industrial design befitting of its solid build. Whilst they exhibit a heavy industrial feel, they are actually quite light, rigid and flexible with robust hinges that allow it to weather rough handling.

They weigh in at around 325g – the same as the SteelSeries H and slightly less than the Astro A50’s. The fitting is not bad and the clamp around your head is good owing to its solid rigid construction but because of the way they are shaped and fit on your head, you don’t get a tight seal around the ears like you get, with the SteelSeries H and to a lesser extent the Astro A50. This does result in some leakage of sound but it’s not a significant issue. 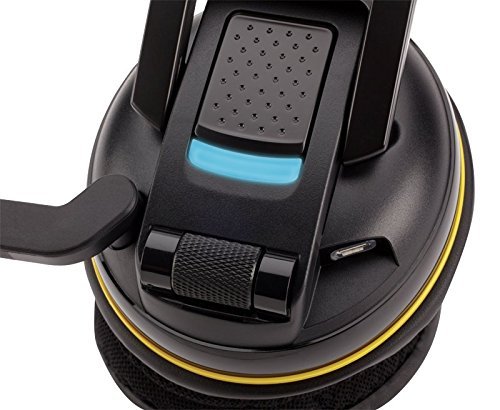 The ear cups use a soft fabric which does not cause any irritation and will absorb any sweat rather than creating it like how the pleather ear cups can n the Steel Series H. There is a longer break in period than the SteelSeries H and Astro A50, but once you get to using them, they are comfortable and seem like they are built to last.

The Corsair Vengeance 2100 features 50mm drivers which can take the max volume up to uncomfortable levels. In our view, the optimum level of sound is reached at around 50-60% of the maximum but for users that prefer greater amplification, there’s plenty more to enjoy. The really impressive thing is that as you reach higher sound amplification, there is very little distortion in the sound quality. The volume is controlled by the integrated volume reel and it controls the system volume rather than the headset independently.

The Dolby Surround Sound is excellent though you can also set them to stereo if you prefer. The bass is tight and not overpowering but you feel it can be a little flat at times. You still get really deep lows without any distortion or overloading and the mid to higher tones sound effects and voices are crisp and clear. But at times it can feel lacking, like in games such as Battlefield 4 which, once you have played with the Astro A50 or Steels Series H, you appreciate more. 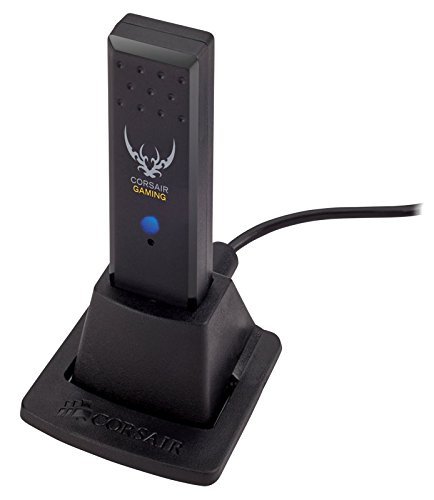 The A50 bass is much more impactful than the Corsair 2100 but at the expense of loosing some clarity and crispness in sound. The Steels Series H has a more well rounded effectiveness in all departments which we go in to more in our review of it – see here. Particularly the bass is exceptional as is the clarity of sound.

The Headset is very simple to use and I was up and running in about 30 seconds owing to its plug and play nature. There is some software you can download to adjust some of its advanced settings but it does not require any drivers. You simply plug the dongle into your PC and its recognised within a few seconds.

The headset has an integrated, non changeable battery which is stated to give you around 10 hour of play time though we managed around 8 before having to plug in the charging cable. It turns out its a real pain that it has an integrated battery because it cannot be replaced if its faulty. Also, it just plainly sucks out the convenience of owning a wireless headset. 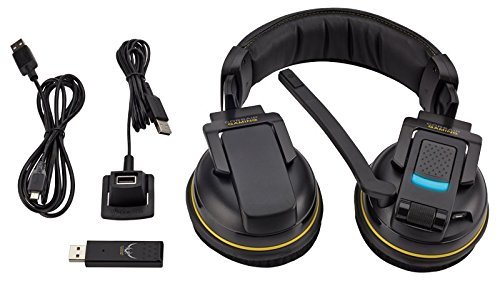 You will need to get a long USB cable if you plan on charging the headset whilst using it as the 1.5m cable it comes with is pathetically short. The Astro A50, also has to be charged in a similar way which we find disappointing. Compare it to the SteelSeries H Headset where you get two batteries with 10 hours of life each (a total of 20 hours of playtime) that allows you to charge one whilst the other is in use, and you wonder why Astro and Corsair made such weird design choices.

We tested the Corsair Vengeance Headset on the same floor and reached around 30ft before we got interference in the sound. That might have been due to the density of the walls so your experience may differ depending on how much open space you have and the thickness of your walls. We got nothing going one floor below and one floor above though we were getting sound near the stairs on the decline/incline. I think around 25-30 ft of wireless range with walls is a reasonable estimation of what you can expect.

We got a slightly better range with the other two headsets, but not a drastic improvement. If it can get you to the bathroom and back we would suggest that its sufficient unless of course you like to listen to music with them on around the house.

The Corsair 2100 Vengeance microphone is reasonable but not as good as some high end headsets though really what can you expect for the price you are paying here. It is not detachable and moves up and down. It can be adjusted to sit closer or further away from your mouth and it wasn’t too difficult to set it in to the optimum corner of the mouth position.

After using the mic on the Astro A50 and SteelSeries H, we found that the 2100 mic is marginally better than those. We think its still slightly lacking for voice over recording but it’s adequate for game chat. Check out the following mic test:

We would suggest if you want to do voice over recordings to buy a separate mic which you can see a good selection of here.

There are really two factors that will determine whether you should buy the Corsair Vengeance 2100:

For strictly PC users on a budget that do not require a feature rich experience but a solid sound experience, the Corsair 2100 Vengeance is a superb choice.

If you are thinking of picking some up, Amazon occasionally have offers on and you can check the cheapest price on the following links Corsair 2100 Vengeance, Astro A50, and SteelsSeries H. Curry’s in the UK also have had them on for £99 see offer here. 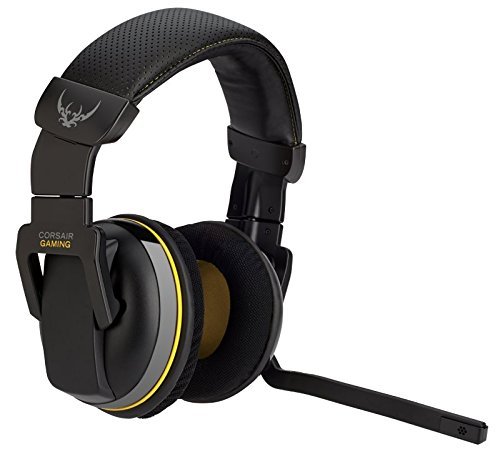 The Bad: Limited to PC only | Not Feature Rich | Charges to the headset | No Removable Battery