The New Astro A50 Wireless Gaming Headset (or the Gen2 Astro A50) is an improved version of the original model and comes in at a hefty $249-299/£200. We reviewed the updated model in conjunction with the SteelSeries H wireless Headset and the Corsair 2100 Vengeance Headset – the individual reviews of which you can check out by clicking on the following links:

Astro A50 Version We Reviewed

We managed to get the Astro A50 for the PS4 though the Astro A50 for the Xbox one and the PS4 are identical save that the Xbox one version comes with the Microsoft chat adapter which is required for in game chat and of course the different colour schemes which are both beautiful to look at. There are also different editions of the new model such as the Halo Master Chief version. 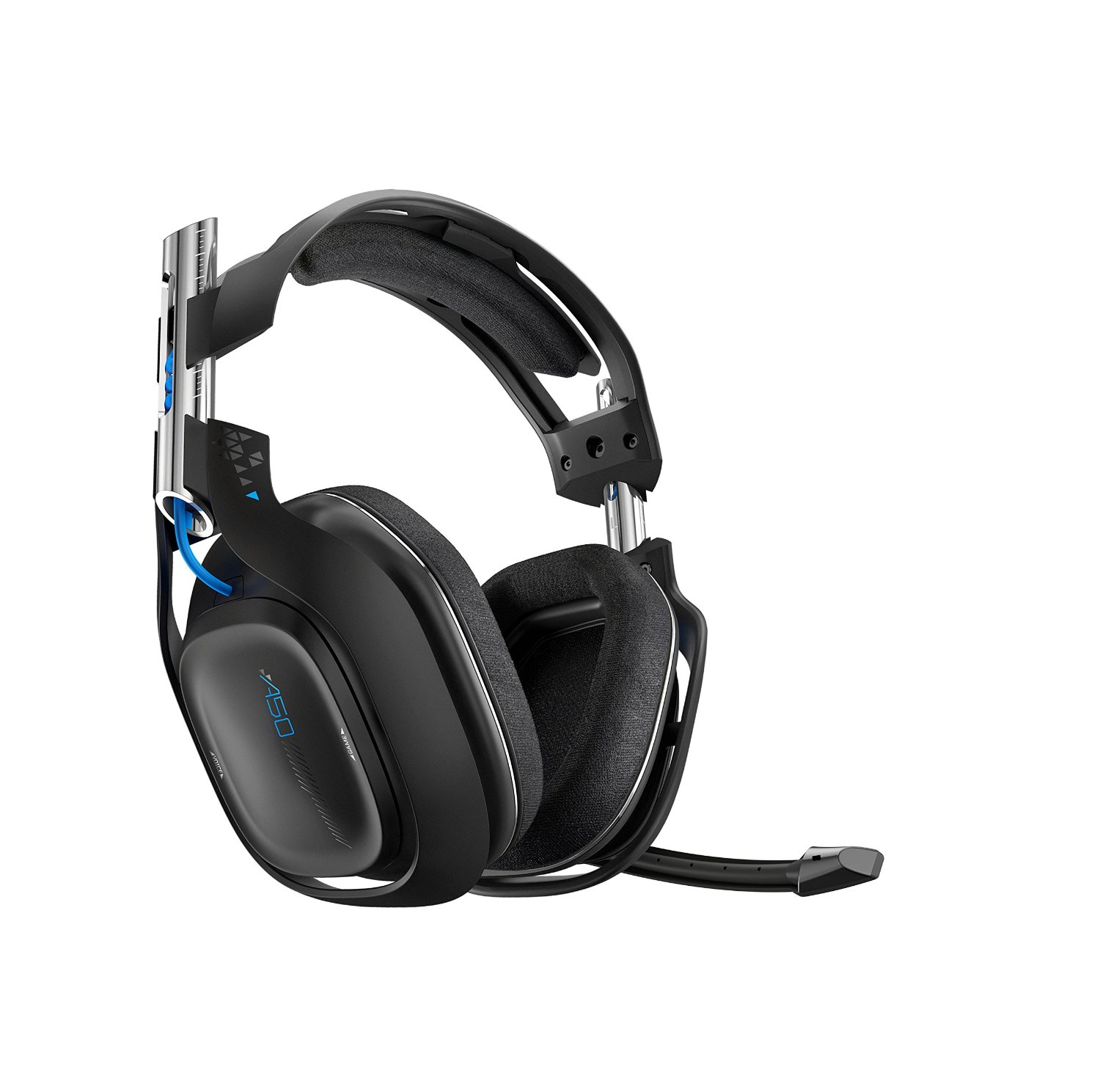 Thanks to the Dolby Pro Logic IIx, the Astro A50 is a game changing experience offering full immersive digital 7.1 surround sound. It’s versatile enough to use for music and games but its in gaming where it truly excels. There are a few things that prevent it from being a perfect wireless headset and in our view slightly behind the Steel Series H Wireless Gaming Headset but on the whole you cannot do wrong in opting to pick a set of these up.

It utilises Dolby Digital 7.1 and whilst this particular one is console specific, the Astro A50 generally is compatible with all major consoles (for the Xbox One, you need the separate chat adapter), PC and smartphone devices. In addition, it uses Kleerner 5.8ghz wireless technology which supposedly gives crisp and clear broadcasting. Unfortunately, it doe snot use Bluetooth – as is the case with the Steels Series H and Corsair Vengeance 2100, which is a shame as it would be nice to be able to connect to devices via Bluetooth. Compare this to the Turtle Beach Elite 800 which does have Bluetooth connectivity – see our comparison of the Astro Gaming Wireless A50 and Turtle Beach Elite 800.

The headset has an integrated non changeable battery which is charged using a micro USB cable into it. It would be nice if there was a neater charging solution on the Astro A50 similar to how the Turtle Beach 800 elite works or being able to hang it off the stand and it automatically charge. You can charge it whilst playing but you will probably need to invest in a longer cable. We feel that this is where the likes of the SteelSeries H and Turtle Beach 800 Elite excel in that they are complete wireless solutions with additional battery packs that offer much more convenient charging solutions. 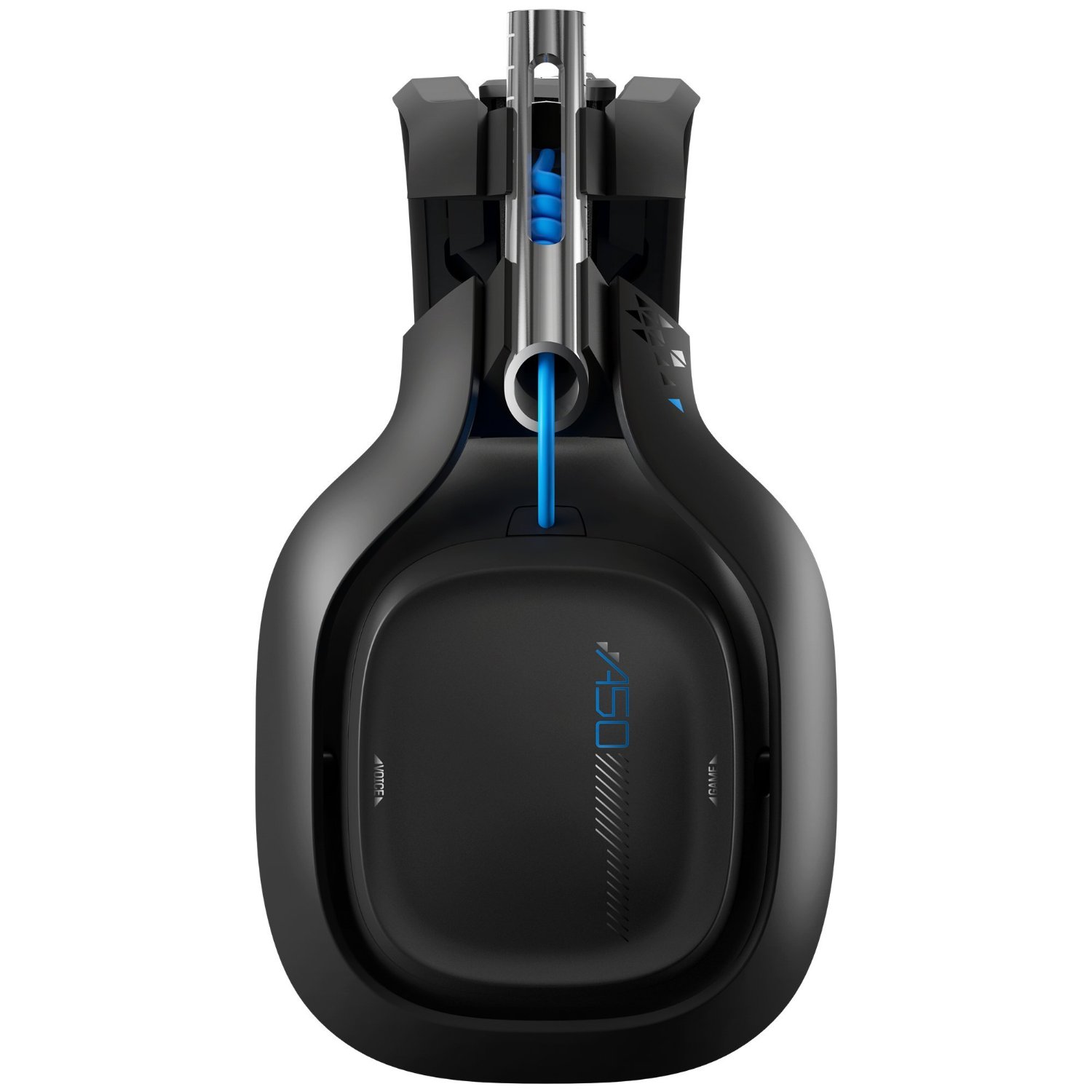 On the right ear cup, you will find the power button, 3 EQ settings and a volume wheel. The 3 EQ settings do a good job in defining 3 different sound profiles which are sufficient to give you an enjoyable experience for your music, movies and gaming use.

On the left ear cup you will find the microUSB slot to charge the headset, and the cable slot for chat which will hook up to your controller from this slot on your headset. So whilst the audio to the headset is fully wireless, you still need the headset connected to the controller for chat.

As we said with the SteelSeries H, the Astro A50 looks sublime and whilst the SteelSeries H has a more professional look and feel to it, and the Corsair Vengeance 2100 a more industrial mechanical design to it, the Astro A50, unquestionably looks like a gaming headset and of the three, the one that looks dedicated for gaming.

Whilst heavier than the other two headsets, the Astro A50 is fairly lightweight at just over 350g but it does not feel all that bulky unlike some competitors out there such as Turtle Beach. The various colour schemes available are also not as extravagant as what you might expect with the range of Turtle Beach headsets.

The Astro Gaming A50 Wireless headset feels very robust and it uses metal/chrome side arms to give it strength and adjustability. There isn’t much clamp pressure on the headset and they may feel slightly loose but it just takes some getting used to and they never feel as though they are capable of slipping of your head thanks to the adjustable arms. 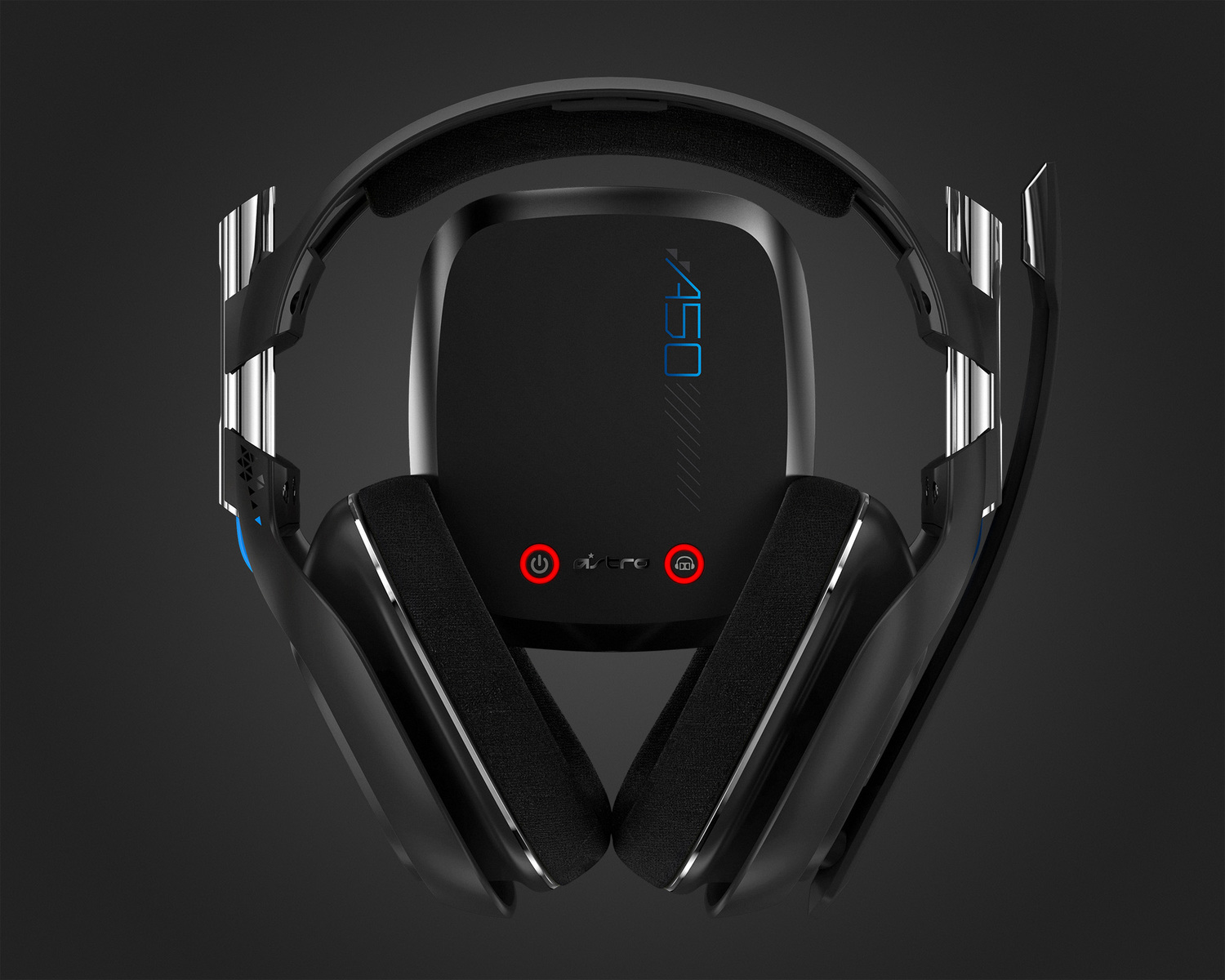 The material on the earcups are soft and comfortable and use a microfibre foam cushion which helps with long gaming sessions. The headset itself has a nice soft matte feel to it.

As with the previous version, the microphone is not detachable and clicks on and off as you pull it down towards your mouth and back up. Not being detachable might be inconvenient  if you are not a big online chat guy or use it to watch movies with and have a tendency (like me) to nod off with them on – you can risk breaking it off.

The biggest complaint with the Astro A50, beside the charging solution is the microphone. It is not that it’s really bad but rather it’s just not very good and does not massively improve on its predecessor. Your voice can be heard online and so it does its job, but given this is the Gen2 model, we were expecting a lot more from it. We would say it has little or no improvement of on the first model and probably not all that better than the Astro A40 mic.

When comparing headsets microphones, it is worth noting that the sound is compressed anyway so what you find is that the sound that is received is not truly representative of the sound source and that most microphones perform broadly on the same level of quality. However the source does make a difference and so we cannot let the Astro A50 off too lightly due to compression.

We have left a short mic test clip below so that you can make up your own mind on the issue. As we said however, whilst it does leave a lot to be desired, and not ideal for recording, it is perfectly functional.

I walked around the house with this on and it quickly became apparent that it cannot cope with heavy walls or more than one staircase before losing soft connectivity. You should be able to get around 30 to 40 feet range if not more but it will depend on the interference in your home and thickness of walls.

The volume control is much better in that there are small increments so that you don’t accidentally whack the volume all the way up or down and instead you enjoy more control over how much volume you want to increase or decrease it by. The highs of the volume are very clear and the sound generally is superb.

The Astro A50 can get uncomfortably loud and there doesn’t seem to be any way of limiting how high volume can go on the headset. If you like high amplification, you’re really going to enjoy the greater amplification which suffers little to no sound distortion as you ramp up the amplification. One issue that we did identify is that they can make your ears tickled when the rumble kicks in and so it may be a sensible indication of being too loud.

Insofar as noise cancellation it is it is not super tight and you can leak sound so I would say it’s pretty average in this respect. Everyones experience may differ on this point however as they will fit different sized heads, differently.

The sound is where the Astro A50 truly excel and perform, of the three, probably the best or at least on par with the SteelSeries H. The 7.1 Surround Sound sound is incredibly crisp and clear and you get a good sense of situation awareness whilst in game. Playing destiny with this headset on for example is incredible and will give you a competitive advantage in most online games.

There is a good level of mid-range sounds and it performs really well with higher tones. The bass is incredible and of the three probably the best, but it does make some compromise on clarity and crispness. You may occasionally notice that there is some loss of midtones when for example playing some games that are either extremely busy and chaotic but its largely unnoticeable and overall, the sound on these is way up there among the best sounding headsets, let alone wireless headsets. 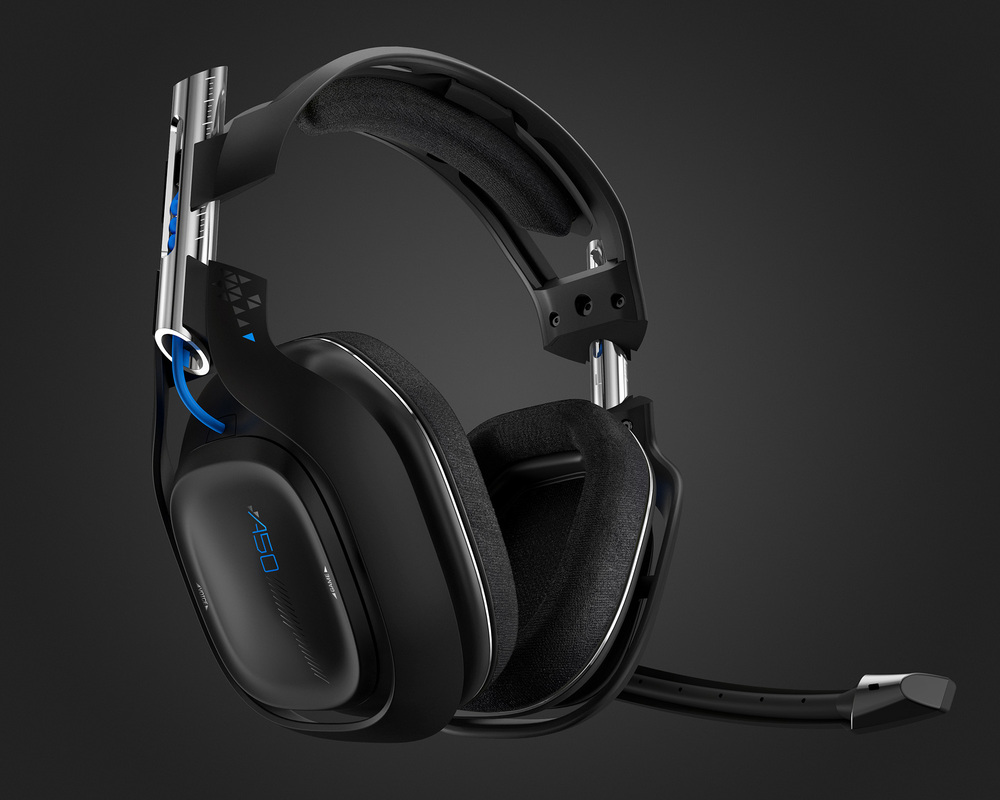 The earcup mixer which is controlled by the ear cup makes mixing came and chat controls easy without having to search of fumble around for particular buttons.

The music sound is also really good and you can actually play the music wirelessly if you hook up your device to the mixamp. You are however then limited to the range of the mix amp and so if you want to be walking around the house, you can connect your smartphone device or MP3 player directly to your headset.

Should I Buy the New Astro Gaming A50 Wireless Headset?

This question could be slightly rephrased to say should I upgrade to the Astro in 50 if I already have the Astro A40 or previous A50?

If you’re looking to upgrade than the answer would be no. There just really isn’t enough added the Gen2 version and with the mic not improved, it does not justify making the leap at the hefty asking price. Even if you have the original Astro A40’s, we would advise that unless you really want a wireless headset, there isn’t that much difference and that the Astro A40’s still deliver exceptional sound.

On the other hand if you’re looking to pick up a new wireless headset, or have never owned a set of Astro Wireless Gaming Headsets, the new Astro Gaming A50 Wireless is a phenomenal choice that we wholeheartedly recommend.

If you are in the market you can check for best prices by clicking on the following links:

The SteelSeries H will probably give a more well rounded experience and the charging solution on it tips it for us as the best of the three. But we do love using the Astro A50, no doubt about it and you cannot go wrong in picking up a set. The Corsair Vengeance 2100, lacks in a lot of features but has impressive sound and mic. Therefore, that may prove to be a viable alternative if you want a more bare bones experience.

You can see offers for the other headset through the following links. 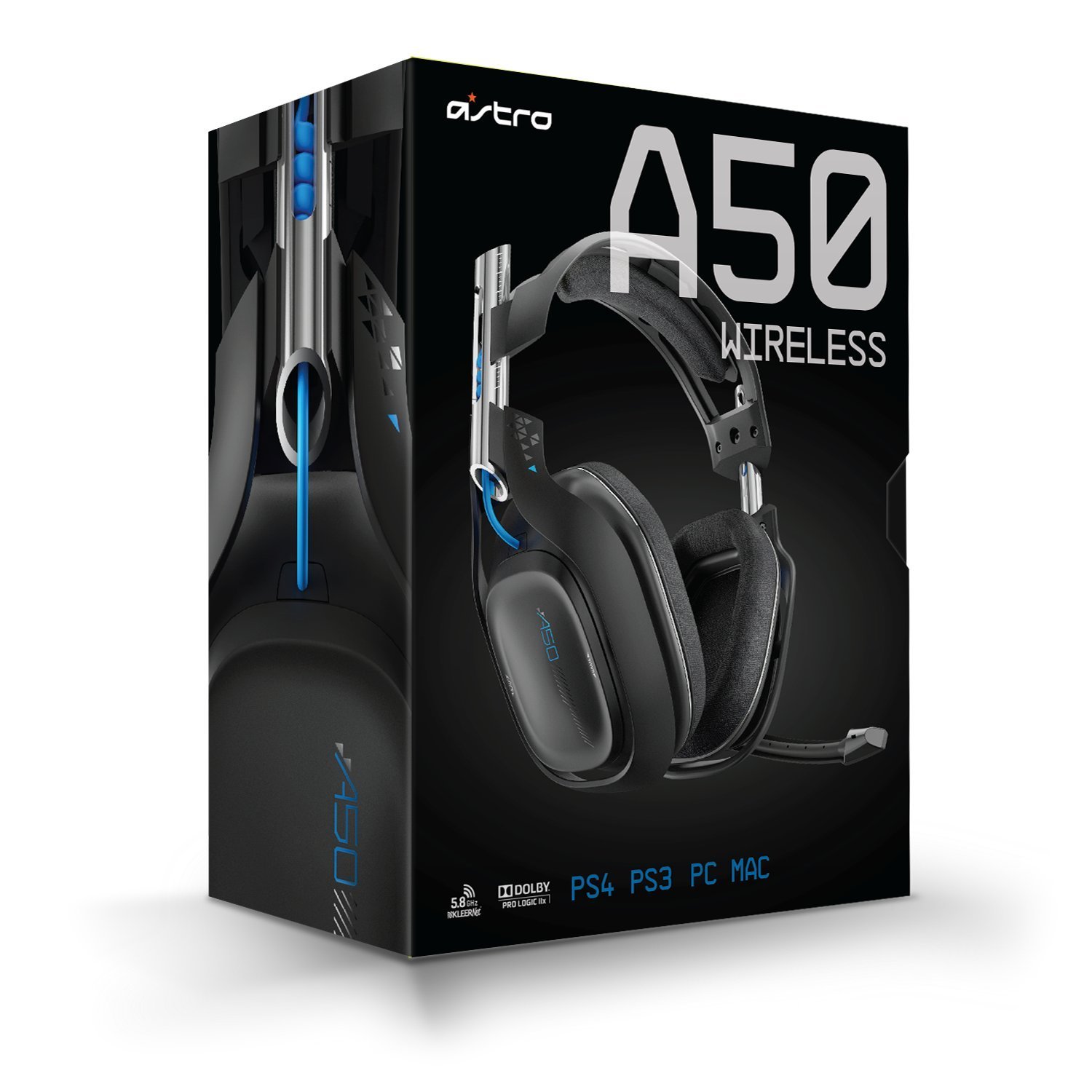